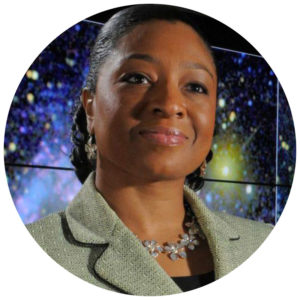 Dr. Christyl Johnson is Goddard’s deputy director for technology and research investments. She manages the center’s research and development portfolio, and is responsible for formulating the center’s future technology goals and leading an integrated program of investments aligned to meet those goals.

Christyl Johnson joined NASA Goddard as deputy center director for science and technology on Dec. 6, 2010. In July 2012 Goddard Center Director Chris Scolese reorganized some of the responsibilities of the Goddard Executive Council, at which point Johnson assumed her role as deputy director for technology and research investments.

Johnson came to NASA Goddard from the White House Office of Science and Technology Policy, where she served under the President’s science adviser as the executive director of the National Science and Technology Council (NSTC), which is the principal means within the executive branch to coordinate science and technology policy across the Federal research and development enterprise. She was responsible for ensuring the establishment of clear national goals for Federal science and technology investments in a broad array of areas across the executive branch, including basic science, technology, energy, environment, natural resources, and homeland and national security.